DVDSleuth.com is your source for daily Blu-ray Disc and DVD reviews. 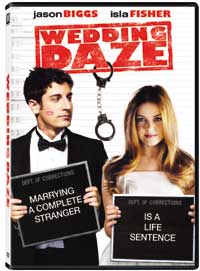 All Ratings out of

The history of film is filled with movies which were shot, completed, and then not released. (Just check the Miramax catalog for a slew of these movies.) I imagine that in the past, Hollywood studios were able to sweep these movies under the rug, or maybe release them only outside of the United States. But, in the information age, it's hard to hide anything from the public. Thus, we have movies such as Wedding Daze (AKA The Pleasure of Your Company, AKA The Next Girl I See). This film was shot in 2005 and is only now going directly to DVD in the U.S. Typically, these films are abysmal and it's easy to see why they were shelved. However, Wedding Daze may deserve a second glance.

As Wedding Daze opens, we meet Anderson (Jason Biggs), a young man who is about to propose to his girlfriend, Vanessa (Audra Blaser). But, just as Anderson pops the question, Vanessa's heart pops and she drops dead. The movie then jumps ahead one year. Anderson spends most of his time alone in his apartment, as he's still mourning Vanessa's death. His best friend, Ted (Michael Weston), urges Anderson to start dating again, so, as a way to appease Ted, Anderson asks a waitress, Katie (Isla Fisher) (who he doesn't know) to marry him. What Anderson doesn't know is that Katie is struggling with the fact that her boyfriend proposed to her the night before and she doesn't want to marry him. So, she says yes to Anderson. The two spend the day together and attempt to get to know one another. Anderson is unsure around someone other than Vanessa, and Katie is simply trying to escape from her present relationship, but the two begin to feel a bond. But, can they ever convince their families and friends that they aren't crazy? And, can two total strangers get married?

Again, when watching a movie which has languished on a shelf, it's usually a snap to figure out why the film was delayed -- bad acting, bad story, etc. But, Wedding Daze is somewhat different. I had no problem spotting the scenes which the typical test audience would hate, and they didn't stem from a lack of quality. These moments resulted in the bizarre and off-kilter nature of this little movie. Close examination of the movie reveals a central plot which many audience members would find hard to swallow -- who would seriously consider a marriage proposal from a complete stranger? Also, the movie's sense of humor is all over the place, and some jokes definitely push the envelope.

was written and directed by Michael Ian Black who was a member of the comedy troupe The State and is now known to most for his appearances on VH-1's various I Love the... specials, where he interjects his brand of dry humor. That humor is certainly evident in Wedding Daze, but there's also an irreverent goofiness here. Unlike his fellow The State alums who made the inscrutable The Ten, Black has filled this movie with a sense of playfulness and a touch of romance, which offsets the odd humor which crops up from time-to-time. Being somewhat familiar with Black, I wasn't necessarily surprised by the odd moments in the film, but it was the direction which these moments took which took me aback. Essentially, Black has made a Farrelly Brothers movie. The tone of Wedding Daze is not unlike that of There's Something About Mary or The Heartbreak Kid. (Although, it's nowhere near as funny as either of those films.) The main characters in this movie may be a little odder and the central idea a little stranger than those found in a movie by the Farrellys, but we get a similar cast of supporting characters and strange moments which make the main characters look completely normal. I'm not going to give anything away here, but the scene involving Anderson's parents, played by Edward Herrmann and Margo Martindale, are shockingly funny and I'm sure that they would win a seal of approval from the Farrellys.

The unfortunate news about Wedding Daze is that it can completely overcome its shameful past. The movie is certainly funny in spots and I found myself laughing out loud at times (again, mostly at Anderson's parents). However, I never felt that we truly got to know the main characters, while Black kept bringing in more and more supporting characters who only got weirder and weirder. (Fans of Joe Pantoliano will have to check out his odd cameo.) The movie also drags in the third act, where Black seems to have run out of ideas. Still, the cast of familiar faces is good. Biggs may be playing a slightly older version of Jim from the American Pie films, but he has mastered the role of "likeable goofy guy". Fisher's character is similar to the one which she played in

Hot Rod and as in that film, her Australian accent comes through at times, but her energy is infectious. For those who don't mind a romantic-comedy with some very odd side-stories, Wedding Daze could be a good choice for a rental.

walks down the aisle (finally) on DVD courtesy of 20th Century Fox Home Entertainment. The DVD contains both the full-frame and widescreen versions of the film. For the purposes of this review, only the widescreen version was viewed. The film has been letterboxed at 1.85:1 and the transfer is enhanced for 16 x 9 TVs. Even for a Fox preview disc, which can look bad, this transfer looks awful. Artifacting and shimmering about throughout the film, and in every scene there's at least one inanimate object which looks as if it's about to slide off-screen. In addition, a slight amount of grain is visible throughout the film. The colors are OK, but the image is somewhat washed out at times. These issues seem too prevalent to not exist in some form on the final release. The DVD has a Dolby Digital 5.1 audio track which provides clear dialogue and sound effects. I didn't detect any notable audio effects here other than some subwoofer reactions. For the most part, the audio comes from the center and front channels.

The only extras on the Wedding Daze DVD are three DELETED SCENES, one of which should have been left in the film, as it helps to explain the opening of the movie.

On July 5, 2011, 20th Century Fox Home Entertainment brought Wedding Daze to Blu-ray Disc.  The film has been letterboxed at 1.85:1 and the Disc contains an AVC 1080p HD transfer which runs at an average of 30 Mbps.  The image is sharp and clear, showing no defects from the source material.  There is a very fine sheen of grain on the image, but it's only truly distracting when a white or bright background is present.  The colors look very good, most notably reds and the image is never overly dark or bright.  The level of detail is very good, as we can see textures on objects, and this is aided by the crispness of the image.  Definitely an improvement over the DVD.  The Disc carries a DTS-HD Master Audio track which runs at 48 kHz and an average of 3.5 Mbps.   The track provides clear dialogue and sound effects.  The stereo effects are nicely done and detailed, most notably with the music and street sounds.  However, the surround sound effects are far too quiet -- even during moments with big musical cues, we barely get anything from the rear.  These same musical interludes do offer fairly good bass.  The extras on the Blu-ray Disc are the same as those found on the DVD.